As is the case with so many other types of foods, cilantro is something that many people either like or dislike intensely. Unlike other foods, however, disliking cilantro may not simply be a matter of preference. For some people, it is actually believed to be a matter of genetics.

The leaves and stems of the coriander plant are considered in culinary circles to be an herb, while the seeds – either whole or after they have been dried and ground – are considered to be a spice. All parts of the coriander plant, including the small flowers it produces if it is allowed to grow long enough, and the roots are edible. Coriander is very closely related to cumin, caraway, dill, fennel, and parsley, and is actually sometimes referred to as Chinese parsley.

Although it is believed to be native to what is now the Southern part of Iran, coriander/cilantro grows wild throughout Central Asia and Southern Europe as well as other parts of the Middle East, and agricultural historians are unsure exactly how the plant spread to different regions. What is known is that it has been cultivated (and consumed as both an herb and a spice) by humans in various parts of the world for thousands of years. Coriander has been found in ancient urns discovered during archeological digs in what is now Israel dating back to around 7,000 BC; was placed in the tomb of the Egyptian Pharaoh Tutankhamen (around 1300 BC), and is believed to have been grown in the ancient Hanging Gardens of Babylon (around 600 BC). It was cultivated by the Ancient Greeks and Romans dating back over 3,000 years and is believed to have been one of the ‘bitter herbs’ referred to in the Old Testament as part of the Passover Feast of the Hebrews. It has been used in traditional Chinese and Far Eastern medicine for many centuries.

Today, coriander/cilantro is cultivated (and can still be found growing wild in many places) throughout the world and forms an important part of many different cuisines. While there are no exact numbers available regarding the plant’s commercial production worldwide, it is widely commercially cultivated throughout Asia, Central and South America, Europe, and the warmer portions of the United States – particularly California. It is also a very popular plant with home gardeners throughout the world; in many colder regions, coriander plants are started in greenhouses or in pots inside the home and transferred to a garden outside in the mid to late spring, as the plant is not particularly tolerant of frost and thrives in warmer temperatures.

While for most people cilantro has a somewhat tart and pungent lemon/lime-like flavor, a significant portion of the population (perhaps as much as 15 to 20 percent) believe that it tastes a lot like dishwashing soap, and find it disgusting and inedible. Scientists believe this to be caused by a gene in some people that is particularly sensitive to aldehydes, a chemical compound that is found in cilantro and which is often used to give certain soaps their scent as well as in the perfume industry. In a smaller segment of the population, eating cilantro can cause a mild to a medium allergic reaction.

So what are some of the most common types of cilantro around today? 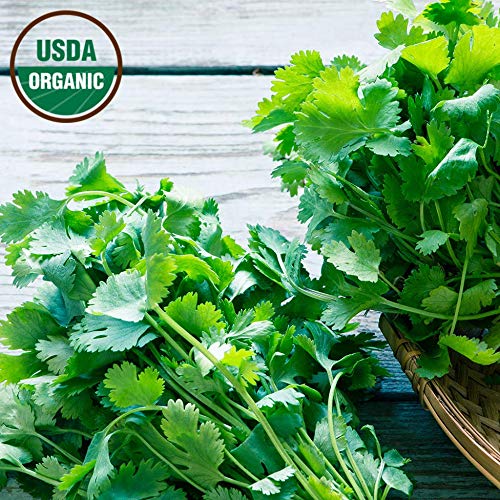 While there may be some subtle textural and flavor differences between specific cultivars, most of the ‘general’ cilantro types that you are likely to find at your local grocery store or farmer’s market (at least in the United States and Canada) are going to look and taste pretty much the same. In many cases, the specific ‘type’ of cilantro won’t even be identified. However, most of the cilantro (both the commercially grown final product in stores and the seeds you can buy for your garden) will be ‘slow-bolting’ cultivars.

The coriander plant grows very quickly and, particularly in the hotter climates where it grows best, will tend to ‘bolt’ (or go to seed and produce flowers) fairly quickly – often in as little as three and a half weeks. Once this happens, the cilantro (leaves and stalks) will rapidly lose their flavor and eventually become quite bitter and useless.

Slow-bolting varieties (not surprisingly) take longer to go to seed – in some cases up to 5 weeks – particularly when planted in shady areas. They will usually produce larger, more flavorful leaves and a greater abundance of them – giving both commercial growers and home gardeners more time to harvest, as well as a better yield.

Generally, Slow-bolting cilantro varieties will grow to between 18 inches and 2 feet tall – although the leaves from seedlings can be harvested when they are between 2 and 4 inches tall (normally about 18 days). They will usually have flat, feathery, medium to dark green leaves and similarly colored stalks. Normally, the upper (newer) leaves will be the most tender and flavorful. Both the leaves and stems are widely used as an ingredient in salsas, pesto, and guacamole, as well as stir fry and rice dishes, curries, sauces, and soups. The leaves are also often used as a garnish for meat, fish and poultry dishes, and can be used to make butter. Slow-bolting cilantro is best used fresh – as soon after picking as possible – as it will not last very long. It will lose most of its flavor if it is dried, although it can be frozen.

Also considered a slow-bolting variety, Santo cilantro is a very popular cultivar with professional growers and is grown in many parts of the world including Central and South America, the US and Canada, and some parts of Asia. One of the slowest growing of the coriander family of plants, Santo can take 6 to 7 weeks to bolt while the large, flavorful leaves can be harvested starting at about three weeks. Being what is known as a ‘cut and come again’ plant, leaves can be harvested throughout its growing cycle. Santo cilantro is a particular favorite with home gardeners the world over both for its flavor and the fact that after it has bolted its flowers produce very aromatic pollen that will attract butterflies and other beneficial insects to the garden.

The Santo coriander plant will usually grow to between 2 and two-and-a-half feet in height; unlike many types of coriander, it is an ‘upright’ growing plant, which keeps the leaves off the ground and makes them easier to pick. The leaves are flat-toothed and slightly spiny, are a light to a moderate shade of green, and have a sharp lemon/lime, slightly nutty flavor. The stems are particularly strong, making it easier to bunch. Santo coriander is widely used in Mexican and some Asian dishes and as a garnish.

Also called Ram Ram in its native Vietnam and Daun Kesum in Malaysia, Vietnamese cilantro is (not surprisingly) a native of Southeast Asia, where it has been cultivated for centuries. It is also grown throughout Central Asia and parts of Europe. In recent years it has caught on with gardeners in the United States, although those not living in the warmer parts of the country will usually have to start the plants in containers indoors as the plant cannot tolerate cold weather. It is also quite popular as an indoor plant.

One of the smaller coriander plants, Vietnamese cilantro will usually only reach a maximum height of about a foot when fully grown, and will rarely flower outside tropical or subtropical conditions. The stems can be either green or light red, while the leaves are generally smooth and dark green, often with a maroon blush or streaks. It tends to have a spicier overall taste – and more of a lemon-like quality – than other cilantro. Vietnamese cilantro is widely used in certain types of salads, in the preparation of duck and fish dishes throughout Southeast Asia, and in soups. It is also an essential ingredient in Larb (a mince-meat dish) – the national dish of Laos.

Vietnamese cilantro has also been cultivated as a medicinal herb for centuries. It is believed to have anti-inflammatory and pain-relieving properties and is also used to treat digestive problems and diarrhea. It is also believed by some to repress sexual urges; in many parts of Southeast Asia, it is routinely eaten by Buddhist monks who believe that it helps them to remain celibate.

Calypso cilantro has been gaining in popularity in the United States and Canada in recent years, due in large part to the fact that it is one of the slowest growing coriander plants out there – often taking two months or longer to bolt, although harvesting the leaves can usually start after about 4 weeks. The plant does well in colder climates, and will usually grow to between 12 and 18 inches in height. It is particularly high yielding and produces relatively large, light green leaves and strong stems. An upright growing plant, the Calypso is another ‘cut and come again’ variety, and is suitable for all basic cilantro uses.

The product of one of the most recent cultivars of the coriander plant, Confetti is an ‘improved’ type of cilantro that has a milder, less overpowering lemon/lime flavor while also being quite a bit sweeter. The plant will generally grow to between 18 inches and 2 feet in height and produces relatively thin stalks and fine, feathery leaves that look more like dill than cilantro. Confetti cilantro is a fairly hardy cultivar that resists most pests better than some other types and does well in colder climates. Designed specifically to appeal to individuals who find regular cilantro a bit too much to handle, Confetti cilantro is best used in salads, fresh salsas, and gazpachos, and as a garnish. It also pairs well with more delicate fish dishes.

Also called Mexican cilantro, Long Coriander, Shadow Beni, Recao, Bhandhania, and Ngo Gai depending on where in the world you happen to be, Culantro is a tropical herb plant in the same family as coriander, but which is botanically a different species altogether (although the two are often confused, particularly in the United States). Native to Central and South America and Mexico, Culantro is widely cultivated all over the world (as can be discerned from the wide variety of names) both for its culinary uses and its medicinal properties.

The Culantro plant produces large (8 to 10 inches long, 2 inches wide) serrated, glossy green leaves that taste a lot like cilantro, only far more intense. Culantro generally stands up to cooking better than cilantro, and so is often used in its place in spicier dishes. It is most often used in Mexican, Central, and South American cuisines as well as the Caribbean, Indian, and Southeast and Central Asian dishes. As a medicinal herb, Culantro has been used for centuries to treat a large number of conditions including fevers, high blood pressure, earaches, burns, asthma, snakebite, malaria, and diarrhea. It is also believed to have anti-inflammatory and anti-convulsive properties, and in some parts of the world is used to treat seizures caused by epilepsy.

1 thought on “6 Different Types of Cilantro”