T-shirts are one of the most basic and most beloved types of shirts in the U.S., as well as in countries across the globe. As a comfortable and versatile choice of top, T-shirts are enjoyed by men, women, and children of all ages. T-shirts are easy to wear and can be styled as part of a fashionable outfit.

The T-shirt is named for the silhouette that it creates. If you lay a T-shirt on a flat surface, you’ll see that the arms and the torso of the shirt roughly form the letter “T”. Simple and straightforward, it’s not hard to see why this shirt became a classic staple of men’s and women’s wardrobes.

The T-shirt has been around since the late 1900s. The first T-shirts were made by workers who snipped their jumpsuits into two pieces to manage hot weather. In 1898, the earliest official T-shirt was made. This was at the time of the Mexican-American War, and in 1913, the U.S. Navy distributed T-shirts as approved undershirts.

T-shirts have come a long way since the 1900s. Now, T-shirts come in all different cuts, styles, and fabrics, with options available for all sorts of occasions. Here, we’ll cover some of the main T-shirt types, along with the key characteristics for each type. 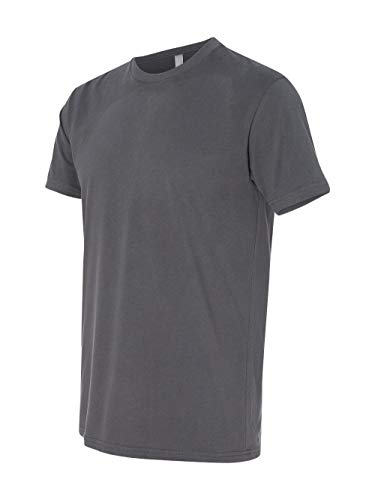 The crew neck T-shirt is the classic, standard t-shirt type. With a round neckline that sits close to the neck, crew neck T-shirts have never (and likely will never) go out of style. The simple design looks great on people of all shapes and can be worn for all sorts of casual occasions.

The origins of the crew neck T-shirt go back to the early 1900s with the United States Navy. Marines were issues white crew neck T-shirts at this time to wear mainly as undershirts. These shirts served the purpose of absorbing sweat and being a garment that could get dirty to leave the uniform as pristine as possible. When World War II ended, former marines kept wearing the crew neck undershirts for casual attire. So, the garment caught on as a trend in the United States. 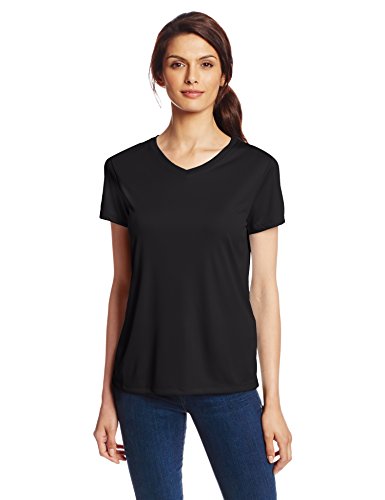 The V-neck T-shirt is an extremely popular T-shirt type worn by both men and women. As the name suggests, a V-neck shirt has a neckline in the shape of a V. This shows more of the chest and sits further away from the neck than a crew neck shirt. 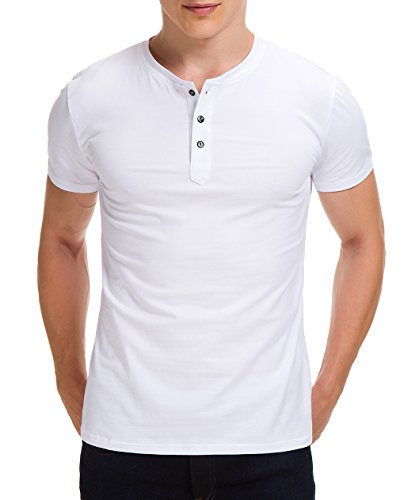 A henley is a type of shirt characterized by a neckline with a button placket. The placket is positioned pointing downward from the center of the neckline. There are usually at least two buttons on the placket of a henley, but no more than five.

The henley design came to be in the 1800s. At this time, henleys were invented as an undershirt – in 1839, the henley was the uniform for the rowers in Henley-on-Thames, from which the name of this type of shirt was derived. Henleys didn’t gain momentum as a style outside of rowing until the 70s when they were incorporated into Ralph Lauren’s collection.

White henley T-shirts have a relaxed, beachy style. This was a particularly popular style in the early 2000s when brands like Hollister, Abercrombie, and American Eagle were all the rage. White henleys are still worn today, often paired with jeans, as a breezy, casual garment for day-to-day wear. 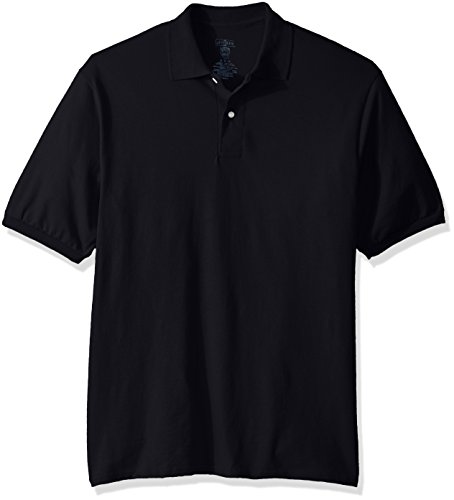 The polo shirt is a unique variety of T-shirt because of its collar and neckline. A polo shirt has a full collar and buttoned placket. The placket typically only has two or three buttons. While polo shirts are most often designed and worn by men, there are polo shirt styles that are worn by women, too.

While the early history of the polo shirt is somewhat hazy, it’s thought to date back to the late 1800s in India. At this time and place, the game polo was invented. The first polo club was started by British soldiers stationed in Manipur, India and gained popularity with British troops over the years. The polo shirt came to be when the regular garment of the era, a cotton long-sleeved shirt, moved around and became uncomfortable while running in a game of polo. Buttons were added to secure the collars to the shirts during the game, and the polo shirt was born.

The polo shirt came to the United States after John E. Brooks, related to the Brooks Brothers brand of apparel, saw the design on polo players during a visit in England. This idea turned into the button-down dress shirt offered by Brooks Brothers, but they eventually began to sell polo shirts as we know them today.

Polo T-shirts are considered to be one of the most versatile pieces in a man’s wardrobe. Considering the origins of this garment, it’s a clear choice to wear while playing sports and tennis. Nowadays, you can even find polo shirts constructed from lightweight, breathable fabrics to wear while working out. But, polo shirts can also be worn as business attire when paired with slacks and a blazer. Even for casual occasions and social get-togethers, polo shirts are a comfortable, put-together option. 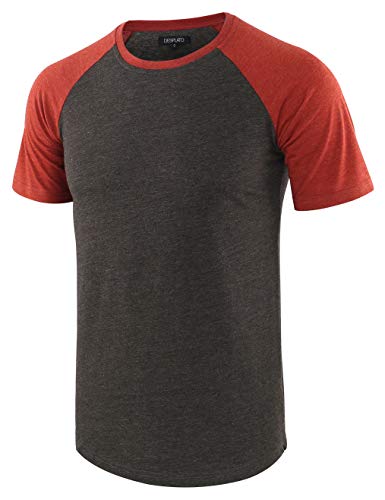 A raglan shirt is different from other types of shirts because of the sleeves, which are the same color as the collar, but different colors from the torso of the shirt. The sleeves and the torso of a raglan shirt appear to be two separate sections, making it reminiscent of a baseball shirt.

Raglan shirts have an interesting history. The name for this garment comes from Lord Raglan, who was the first Baron Raglan. He lived during the late 1700s through the mid-1800s and was an officer in the British army. In the Battle of Waterloo, Lord Raglan lost his arm. After this, to enable Lord Raglan to use his arm, the raglan sleeve was created. It provided a larger range of motion in the arm when compared to other shirts with a secured sleeve head.

Raglan T-shirts traditionally have three-quarter-length sleeves. But, there are also raglan shirts with short sleeves that are expected from a T-shirt. The sleeve length isn’t what characterizes a raglan T-shirt, but rather the extension of the sleeves into the collar. 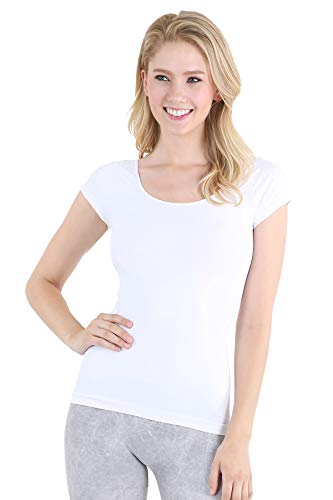 The cap sleeve T-shirt is a mainstay of women’s wardrobes and has been for several years. This sleeve design differs from that of other types of T-shirts because it extends just far enough to cover the shoulders, whereas other T-shirt sleeves extend to the middle of the upper arm.

Cap sleeve T-shirts were worn by soldiers in WWI underneath their uniforms as an undergarment. While cap sleeves continued to be worn in the decades that followed, they weren’t seen as an attractive women’s garment until the 1990s. At this time, cap sleeve T-shirts were frequently worn by women as a casual top to pair with jeans, shorts, or casual skirts. 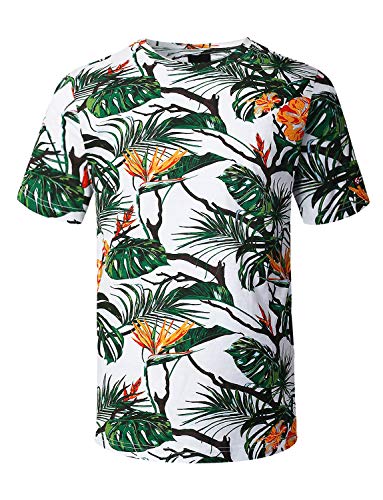 Patterned T-shirts are in style now more men and women alike. The classic T-shirt was a simple white. But, prints small and large, loud and subtle add a stylish, eye-catching touch to the traditional T-shirt design.

Screen-printed T-shirts came to be in the 1960s, approximately. At this time, screen printing started being used as a method for decorating T-shirt. Hippies, protestors, and musicians were among the first to wear this type of patterned T-shirt.

Patterned T-shirts come in all variations of print and color. Designs may be geometric, floral, striped, polka dotted, or truly any print that you can imagine. Patterned T-shirts provide wearers an opportunity to express themselves and stand out from the crowd. 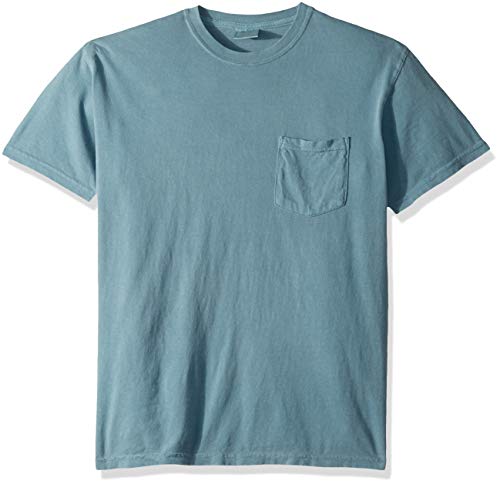 A popular T-shirt style for men and women is a simple T-shirt with a small pocket on the breast. The pocket is usually positioned over the left breast, but it may be to either side. The pocket can be just for decoration or it may be large and sturdy enough to hold small belongings, such as a pen or a house key.

Pockets were added to T-shirt designs around the 1950s. At this time, T-shirts were becoming more popular to wear on their own, not just as undershirts, and design details were starting to be added. Smoking was common at this time and T-shirt pockets were often perfectly sized to store a pack of cigarettes.

As an Amazon Associate elist10.com earns commission from qualifying purchases.