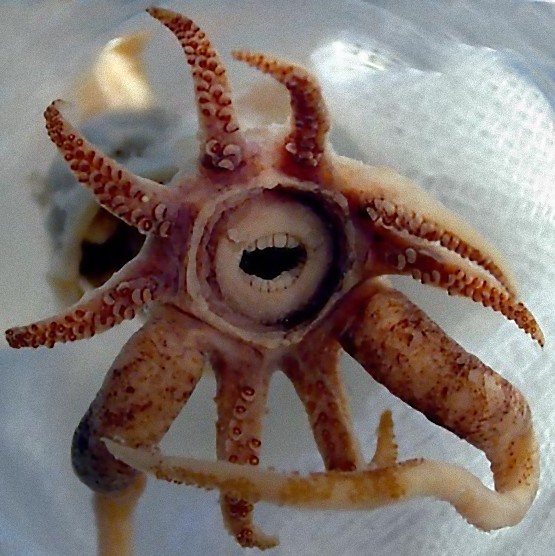 Are you obsessed with zombies and aliens? Definitely, you watch some Science and Fiction movies with curiosity. Do you think lions, tigers and bears are interesting? We all enjoy visiting zoo once in a while. Don’t you also think there are so many other terrifying species out there that lie beneath the surface of the waves on Earth that deserve our attention? Earth’s largest living space – The Ocean surrounds us all, yet more is known about the Moon and Mars. Sharing here, a wonder of ocean and marine life, we begin the journey into 10 freaky creatures of the Ocean. Have fun exploring!

10.  The squid with Teeth (Promachoteuthis Sulcus)

This freakish, alien looking creature is deep-sea squid with a human like teeth. It was captured in the Southern Atlantic Ocean at a depth of 2,000m in 2007. The species comes from a single, immature female, 25 mm long specimen. It has eight arms, with arm suckers much larger than club suckers, with tentacle base wider than arm. Squids often have tough, razor-sharp beaks that they use to chop and chew their prey. Indeed the main feature of the Promachoteuthis Sulcus is Creepy “teeth” with which it regurgitates its food. Moreover, this incredibly creepy looking “teeth” are actually circular flaps of skin, with only lower and upper portion visible. 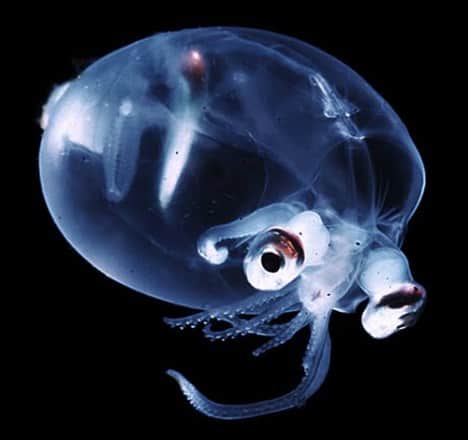 This absolutely real, terrifying and beautiful creature is commonly known as Googly-eyes Glass squid as they possess very large eyes. Their small bodies of around 200 mm are blue transparent which glows in the dark. Its internal digestive organs and the female’s eggs can be visible through its transparent body. It is found in deep oceans of the southern hemisphere. It is able to engorge itself with surrounding water to dramatically increase in size, making them seem much larger to predators as a defense appearing more intimidating. The cells of its eyes and tentacles form small light-emitting organs i.e. makes them bioluminescent.

Giant Isopod is weird creature that spends its time scavenging the deep sea floor, primarily the cold, dark waters of the North Atlantic and the Arctic Circle. They are brown or pale lilac in color with body size from 10 to 36 cm in length. These enormous creatures are a prime example of deep sea gigantism thus can grow to a much larger size (over 16 inches) than similar species in shallower waters. They are known to feed on fish, crab, shrimp, squid, sponges, and whale carcasses that fall to the seafloor as food is extremely scarce at these great depth. The isopod can go for long periods of time without eating. They have been known to survive for four years without food when kept in an aquarium in Japan. It pretends to eat at first as it pokes and rub face in food which has been offered, but quickly returns to ignoring the food.

It’s strange to think of an artistic and flying snail. The Sea Butterfly- a tiny shelled marine snail doesn’t really fly, not in the air or anything. It does swim in the sea using a pair of muscular foot which works as wings, and looks quite a lot like pleasantly tranquil flight. Sea butterflies can be found in the cold waters of the Arctic Ocean, Antarctic Ocean and in the North Atlantic. They can grow up to 5 centimeters in length. They are very slow moving but they show that even snails can be beautiful and mesmerizing. Their shell (when present) is mostly colorless, thus are difficult to see. Sea Butterfly eats plankton and shellfish but these humble snails, due to their small size, are themselves food of marine species like fish, sea birds, polar bears, penguins and even whales. One more interesting facts is that it starts life as a male and becomes female when it reaches a larger size.

This freakish animal may look like a jellyfish or a beautiful pink colored flower, but it’s actually a sea cucumber. It is an echinoderm related to sea stars and sea urchins. From its transparent skin, intestine like ring can be seen inside its body very clearly. It can be found about 2,500 meters below the surface, in the Celebes Sea in the western Pacific. Pink see-through fantasias swims using the webbed structures underneath their bodies that allow them to swim more than 3,000 feet up from the seafloor to find food and to escape predators. 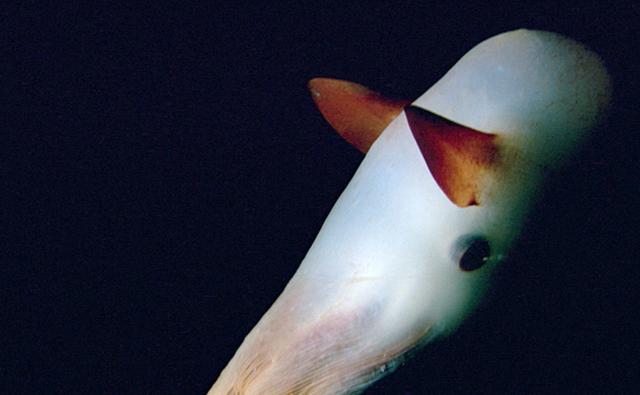 Dumbo octopuses are so named for their likeness to the Disney elephant character because of the ear-like fins. They are small animals, around 8 inches tall. They live in almost all ocean in depth ranging from 13,000 to 23,000 feet. This is clearly the deepest any octopus, ever been found, so far.  Dumbo octopuses possess unique feeding habit as they pounce on prey and eat it whole instead of having to tear and grind it. Their diet includes copepods, isopods, bristle worms, amphipods, bivalve and various crustaceans. Color of the body can be red, green or orange. Flapping their Dumbo ears gets them moving with peculiar grace and ease.

Sponge here, is not scrubbing sponge or a bath sponge – rather it is a simple, aquatic animal that looks like a plant, not having nervous, digestive or circulatory systems. They attach themselves permanently to a solid location on the ocean’s floor. Sponges range in length from (5 mm) to six feet (1.8 m). They are found in the eastern Mediterranean Sea, the West Indies, and the Tarpon Springs area of Florida. Sponges feed by filtering plankton and organic particles through thousands of tiny pores of their bodies. They occur in many colors, including gray, red, yellow, and blue. Interesting feature of sponge is its remarkable powers to regenerate the fragments that are broken off by water currents. Among 5000 species (approx.) of sponges identified worldwide, around seven species are harvested. Harvesting allows for re-generation and extended life of sponge. 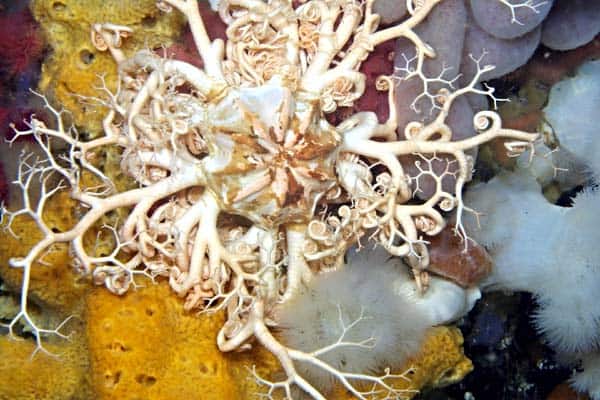 The basket star is basically a fancy fragile star. It was found with its arms intertwined with an octocoral. It is able to filter feed on food floating by in the water and above the seabed. Basket stars are usually found 50 to 500 ft. below sea level of the Pacific coast from the Bering Sea to southern California. Individual color can range with orange-red and almost white tones. Tiny zooplankton are their favored food. When feeding, a basket star wraps several brachlets around its prey and they move the prey masses to the star-shaped mouth. Unlike sea stars, basket stars have two openings at the base of each arm which contain both the gills and the gonads.

A graceful, sessile creature of the seafloor although look decidedly plant-like, are actually one of the most distinctive groups of “soft corals,” or “octocorals.” The name sea pen derives from their resemblance to old-fashioned quill pens. Sea Pens can be found in shallow and deep waters (as deep as 225 feet) from polar seas to the tropics. Most of them are yellow, orange, red or brown. They are treated as colonies of various primary and secondary polyps having specialized functions. Some polyps feed by using tentacles to catch plankton; some polyps reproduce; and some force water in and out of canals that ventilate the colony. The red star, the leather star and some nudibranchs prey on sea pens. When stimulated or touched, sea pens glow with a greenish light which gives mesmerizing looks. 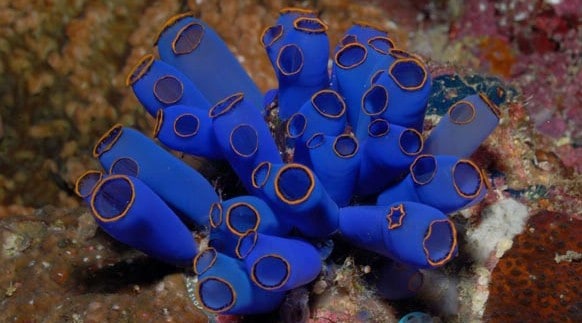 Despite their plant-like appearance, this vacuum cleaner like looking creature are actually tunicates or sea squirts. This species is 0.5-2.5 cm long, and are found in western Pacific and Indo-pacific waters. Like all ascidians, these sessile animals are filter feeders. Color ranges from light to medium blue. This species grows in clusters attached to dead coral or other hard substrates. Sea squirts are normally cylindrical in shape, but can also be round or even bell-shaped. Sea squirts primarily feed on the plankton and nutrients in the water. Snails, crustaceans, eels and even larger fish are the most common predators of the sea squirt. They have both male and female reproductive organs making self-fertilization possible. Surprising facts of Sea Squirt is its blood contains high concentrations of the transition metal vanadium, vanadium-associated proteins and higher than usual levels of lithium.

Who needs science-fiction when there are creatures like this on earth?  Around 80% of the world’s biodiversity lives in the sea. The Ocean provides foods, recreation, minerals, and most importantly majority of our oxygen. Knowing about only 10 freaky creatures beneath sea makes us hard to fathom that we live on the earth which has such surprising facts. Beside these, there are facts like oceans have been overfished, trawling and dredging of ocean floor have bulldozed over entire underwater habitats, shipping of oil are causing serious problem, dumping of waste water into the ocean causing inevitable air and water pollution. Earth is home to some incredible animals, and sadly many are endangered or already extinct. It is our duty as humans to protect and preserve the ocean life. The life forms there are almost otherworldly, and the millions of creatures found are not only interesting and beautiful but pretty freaky as well!!

Please follow this link to find out why we love what we do....About us