While we talk of Buddhism, monasticism plays vital role as it is one of the most fundamental institutions in Buddhist teachings. It’s the monks and nuns who are considered responsible for preserving the religion and spreading Buddhist teachings all over the world. They are responsible for educating and guiding Buddhist followers as well. Looking back the history of Buddhism, monasteries have emerged out of the practice called ‘Vassa’. Vassa is actually the 3-months long annual retreat which the Buddhist Monks and nuns carry out during the rainy season. Gradually, these monasteries advanced into the learning centers and turned out to be the schools where philosophical principles are developed and discoursed. Well, this is just an intro about what Buddhist monasteries all about. Discovering and discussing various facts about Buddhist monasteries is exciting per se. But, we are going to put together some of the uniquely-located and outstandingly-built monasteries to make it more of everyone’s cup of tea. Here are the top 10 picks from Elist10, obviously some of the most beautiful, precariously-situated and uniquely designed Buddhist monasteries from around the globe, just out of this world, deservedly fit to be in this list.

Yumbulagang, which literally means the “The Palace of Mother and Son”, is one of the amazing and unique Buddhist monasteries in the world. Yumbulagang is believed to be the first building in Tibet and the palace of first Tibetan king Nyatri Tsenpo. While the 5th Dalai Lama of Tibet was ruling, the palace became a monastery of the Gelugpa School. But unfortunately, it was heavily smashed and reduced to a single storey building during the Cultural Revolution. Yumbulagang was lately reconstructed in 1983.

If we flip over the history of Buddhism in Mongolia, The Erdene Zuu Monastery is probably the most ancient Buddhist monastery in the country that survives till the date. In 1585, while Buddhism was introduced into Mongolia, the Erdene Zuu monastery was built by Antai Sain Khan. For the construction of this monastery, the stones from the ruins of Karakorum were used. The monastery itself is surrounded by a wall that features 100 beautiful stupas. Probably the number 108 was envisioned but never achieved. The number 108 is regarded as a sacred number in Buddhism. During the Communist rule in Mongolia, Erdene Zuu was allowed to exist as a museum only. But, after the fall of communism in 1990 again, the monastery was turned over the Lamas and Erdene Zuu again became a palace of worship.

Located at the top of Wangbur Mountain in Tibet, Ganden Monastery is regarded one of the ‘great three’ university monasteries in Tibet (the other two being Sera Monastery and Drepung Monastery). The Ganden Monastery is situated at the altitude of 43000 meters (14107 feet). Ganden Monastery traditionally had a smaller population with some 6000 monks during early 20th century as it’s the the farthest from Lhasa of the three university monasteries. In 1959, the monastery was completely spifflicated by the Red Guards and the mummified body Tsongkhapa, the founder of the Monastery, was burned. Its reconstruction process has been continuing since 1980s.

The Lama Temple aka Yonghe Temple or the Palace of Peace and Harmony is located in the northeastern part of Beijing. Built by the Chinese emperors who had a deep fascination for Tibetan Buddhism, Lama Temple is one of the largest Tibetan Buddhist Monasteries in the world. This exceptionally unique monastery is undoubtedly a glittering attraction in the Buddhist firmament of Beijing. It’s the place where many Tibetan and Mongolian monks have lived and taught about the Buddhist philosophies. Even today, we can notice the monk residences. There are mainly three fabulous artworks in the temple including three bronze statues of Buddhas of the three ages, a 26 meter (28 feet) tall statue of Maitreya Buddha carved from a single piece of white sandalwood, and five hundred Arhat Hill. 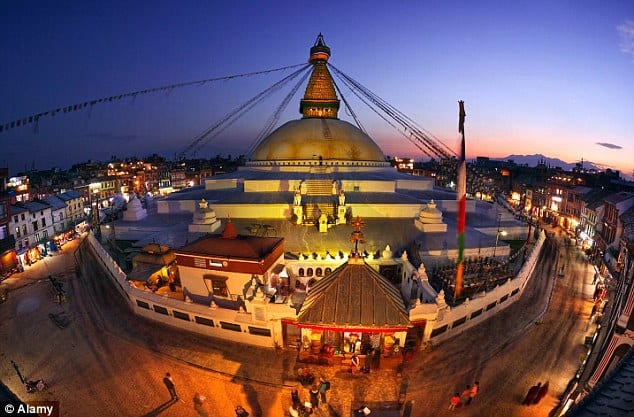 Boudhanath, one of the largest Buddhist Monasteries in the world, is located on the outskirts of Kathmandu, Nepal. Boudhanath is also considered as the center of Tibetan Buddhism in Nepal. The Buddhist Stupa of Boudhanath dominated the skyline. The Stupa itself is best known for its four eyes on all four sides of the tower. In the last few decades, many Tibetan refugees have settled in the monastery. The Boudhanath stupa is believed to one of the oldest Buddhist monasteries in the world. Even the present day monastery is said to be constructed in 14th century. The earlier stupa was destroyed by Mughals. Boudhanath is a UNESCO World Heritage Cultural Site as of 1979.

Of all ancient dzongs in Bhutan, Punakha Dzong is one of the most photogenic one. It stands majestically on an island between the beautiful confluence of two rivers namely, Pho Chhu and Mo Chhu. Well, if you don’t know what dzong actually is, then, it’s a combination of both a monastery and fortress and one is located in every district in Bhutan. Like any other dzong, Punakha also serves several purposes including the protection for the area, the winter home of the monastic life, and an administrative seat for the government as well. An arched wooded bridge joins the Punakha dzong to the mainland. The monastery contains several precious remnants form the successive kings.

Thikse Monastery is one of the attractions that you can’t miss while you are in Leh, India. It’s a Tibetan Buddhist Monastery of the Yellow Hat sect. Located at the altitude of 3600 meters, is noted for its resemblance with Potala Palace in Tibet. With the sun shining on the building, if the monastery is viewed from a distance, the Thikse Monastery looks amazingly impressive and is considered one of the most architecturally grand Buddhist monasteries in the world. The interior of the Gompa is characterized by soothing ambiance. As always, the prayer bells and flags are a delight to behold. Inside the monastery there’s a 49-feet-high statue of Buddha and throne to Dalai Lama placed in inner sanctum.

Built atop the dead volcano plug, the Taung Kalat Monastery is one of the most stunning places in Myanmar. You need to climb the 777 steps to the summit to reach the monastery. Make sure along the way that there are a multitude of Macaque monkeys expecting treats. At the top, the peerless panorama awaits you. And at dawn, there is little to compare to the beauty and serenity of Taung Kalat. The ancient city of Bagan and massive solitary conical peak of Mount Popa is visible from the monastery. Taung Kalat Monastery is also popularly known as Mount Popa Monastery but this is a misnomer. The stupas of the monastery are obviously the remarkable pieces of work.

Tiger’s Nest or Taktsang Monastery is believed to be the place where Guru Rinpoche, the Second Buddha, have meditated. Located on the edge of 900 meter cliff above the Paro Valley, Taksang monastery boasts an outstanding architecture and creates and impressive sight. It’s been said that Guru Rinpoche have appeared in this place while riding a flying tiger, and hence the name Tiger’s Nest Monastery. Rinpoche then retreated to this place to meditate and vanquished the evil spirits. Taktsang Monastery is now considered amongst the most sacred places in Bhutan. With a unique location, the monastery offers astounding views of the surrounding areas.

Located precariously halfway up a cliff some 246 feet above the ground level, the Hanging Monastery is one of the most outstanding sights China can offer. Anyone would wonder how a building like this could withstand the winds and storms so for thousands of years. This monastery is really an architectural wonder. It appears to be the tumble down castle in the air if seen from below. And inside, there’s same scene as other Buddhist monasteries. It appears to be pasted to the side of an utter cliff. Built in the fifth century, the monastery has been hanging here for 1500 years. Obviously, it took several repairs and extensions in the history to maintain present day scale of the monastery. Whatever it symbolizes, from the architecture and everything, really embodies a phenomenal cultural success of Chinese people. With its incredibly unique architecture and location, The Hanging Monastery of China rightly deserves to be the number one in our list of most unique Buddhist monasteries around the world.

There are around 500 million Buddhists worldwide and Buddhism offers monasticism as one of the very fundamental institutions in their philosophy and teachings. There are hundreds if not thousands of amazing monasteries around the globe, each serving unique architectural pattern and location. There are some monasteries that are beautifully designed but are jaw-droppingly located. I have compiled this list simply based on the same two factors: unique design and unique location. However, I am aware that I could have missed out few names which deserve to be in this list. Please let me know via comments below, if you think there are some other more deserving names to be included.

Arun is an IT-gradate. But writing is something he has innate passion for. He loves to explore new things, places and ideas.